Home / News / Should You Give Your Team a Christmas Bonus? 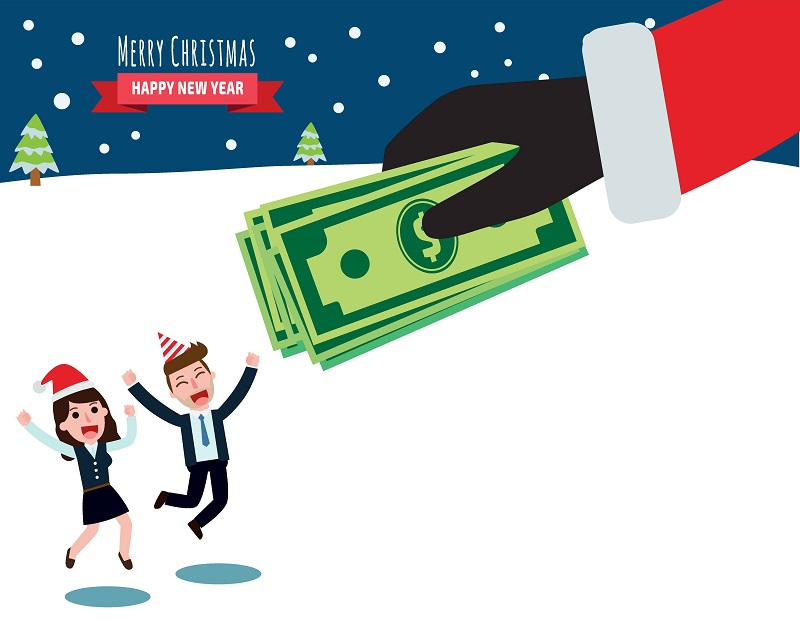 It is that time of year where business owners share good tidings and cheer with their team members. It is a great opportunity to show the team how the business prospered as a result of their combined efforts or it is a great time to inject a little cheer into a gloomy season preparing the team for a prosperous New Year. Either way, the team has come to expect a Christmas bonus at the end of every year, regardless if the practice hits its numbers or not.

Let me tell you a true story of a holiday bonus meltdown. Dr. S loved the holidays and was always generous with his team in giving monthly bonuses of $250 or more to each team member. There was not a set pattern as to how he would calculate the amount. As for the Christmas Holiday, the team was always invited by the doctor to an elaborate year end celebration where they enjoyed a lavish party with great food and gifts, including a sizable cash bonus. This went on for a number of years until, one-year, certain team members expected a large cash bonus but the practice experienced a sizable expense in building out more operatives.  The office was also experiencing write-off’s causing lower production from the previous year. The doctor gave out Christmas bonuses, but they were less than the previous two years.  Dr. S took the time to explain this to the team; however, four team members decided not to show up the night of the Christmas party. Negative attitudes arose from these four employees to the point they were affecting the other team members. Ultimately, some of these employees left the practice. It wasn’t until January 2nd, when Dr. S began interviews to fill “open” positions.

I love a bonus, you love a bonus, your team loves a bonus …. but bonus systems are not a good fit in every practice! It is a system that in the wrong kind of office allows the “slackers” to prosper from the results achieved from the SUPERSTAR employees. When a bonus has been received on an “on-going” basis, it is no longer a bonus; it is viewed as a part of regular compensation. To take it even further, dental professionals still expect an hourly increase in addition to the bonus. Holiday bonuses can create more distress than bonuses based on productivity. The ultimate goal with any bonus or incentive program is to reinforce the behaviors and performance that lead to increased profits and the likelihood of future success. It is to apply some of the profits and share it with the team.  The worst bonus systems, such as the holiday bonus, only reinforce the passage of time and complacency.

If your organization offers monthly bonuses based on performance guidelines, then at times it would be fun to change things up. Christmas would be a great time for this. Bonuses and incentives need to be performance based, where the employee’s performance is measurable and compared to benchmarks. The employees bonus is directly proportional to the additional income they bring to the practice. At Christmas, make it fun and personalized. Some examples are:

1. Purchase a special gift tailored for each employee based on their wants and likes. Present the gift in front of all the other team members and before handing the gift to each employee praise them for something they did or what they bring to the team.

2. Make the event memorable. One office I know took their team out to dinner at a restaurant located in a mall. After dinner the dentist presented each team member with a special gift tailored to them. Once the gift exchange was completed the team engaged in a scavenger hunt game. The employees were divided into teams of three. They were given instructions and a camera to document the tasks on the list. The list contained tasks such as taking a picture with Santa, shake hands with a stranger, and take a picture with a mannequin. The doctor was shocked at how much the team enjoyed the activity. In fact, the team continued to talk about the event for weeks to come.

In the event you do not offer monthly bonuses and have had a very good year, don’t be an Ebenezer Scrooge. Share with the people that helped get you there. If you can afford it, give a Christmas bonus relevant to the team members performance. It’s the perfect way to show your team how much they are appreciated and to say thanks for busting it all year. In fact, make it a line item in your budget now for next Christmas so you’ll be prepared before the 2018 holidays ever begin.

Contact us to learn how Strategic Practice Solutions can help build your practice and increase your dental practice’s productivity and profits.

Have a very Merry Christmas and a Prosperous New Year!

Strategic Practice Solutions, LLC does not warrant or make any representations concerning the accuracy, likely results, or reliability of the use of materials on its website or otherwise relating to such materials or on any sites linked to this site. We do not endorse and cannot guarantee any claims made in content pieces throughout the internet; including blogs and social media. We strongly advise our readers to always do their due diligence.

Thank you! You have successfully subscribed to our newsletter.